How do you eliminate vulnerabilities by design? Isn’t keeping your software up-to-date the best one can do?

Eliminating vulnerabilities by design is a proactive strategy. One example is a serverless design which replaces the traditional web host (running scripts and a database) with a CDN that serves static client applications that only connects to highly trusted and secured servers. Another example is the "Zero Trust" environment where every component is responsible for authenticating every request.

You can’t hack it if it isn’t there.

One characteristic of a good design is that it doesn’t require much maintenance.

If that’s the case, why doesn’t everyone do it?

The reasons have to do with cost and convenience. The open source software business model does not allow for much support, and although web hosting companies usually advertise 24x7 customer support, it doesn’t cover everything. There are restrictions, SLAs, trade-offs and fine print and all of these things are moving targets. There is very little online that isn’t moving. 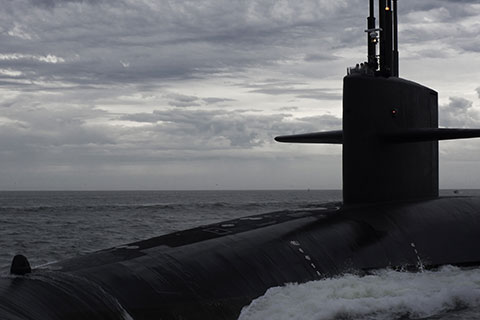 This is the USS Alaska Ohio-class (SSBN 732). By using this image, I don’t mean to claim any military-grade qualifications. I chose this image because it represents ’stealth in an adversarial environment.’

The information security community considers the notion of "security by obscurity " a particularly inadequate defense. However, hackers are constantly collecting evidence in order to find these vulnerabities. I have never seen a website that was not being probed constantly. Whether we recognize it or not, the Internet is an adversarial environment.

"Eliminate the vulnerabilities that can be eliminated — and make the rest disappear."

One of my design goals is to yeild as little evidence as possible. Like a stealth bomber with the radar cross section of a sparrow, or this submarine’s navigation system with an extremely low signal-to-noise ratio, I build sites that yeild virtually no evidence to the legal, anonymous probes and as little information as possible to penetration tests, which are much more aggressive.